To share your memory on the wall of Barry Midwinter, sign in using one of the following options:

Barry was a man of many talents. Over the course of his life, he was an accountant & financial planner, an entrepreneur and later a securities trader. But first and foremost, he was always devoted father and husband. His first priority was always the wellbeing of his family. He demonstrated this time and time again by putting the needs of his wife, children, and grandchildren above his own, whether that meant deferring some of his personal dreams, dropping everything to drive across states, or pausing his career to support his wife and children. His love and pride for his family was clear every time he spoke to one of his children of their most recent triumphs or tribulations, glanced at his wife and partner, or played with one of his five grandchildren. Barry was an inherently kind and supportive man, a provider, and fiercely proud of his family.

Barry was born December 26th, 1954 in Selkirk, Manitoba to Allan and Bernice Midwinter. As a boy he loved chess and was an enthusiastic practitioner of Judo. He joined the Canadian Reserves at 18, making the rank of Lieutenant and earning a scholarship to the University of Toronto. He ultimately earned a degree in computer science from Brandon University as well as the prestigious Governor General’s Gold Medal in that subject. He then obtained the degree of Chartered Accountant from the University of Manitoba. While at Brandon University he met the love of his life, Roberta Midwinter. The two married and moved to Winnipeg where they had three children, Charles, Marianne, & Matthew. The family moved to Brandon, Manitoba in 1989, and later to Chaska, Minnesota in 1995, where Barry and Roberta stayed until his death.

In lieu of flowers, please consider a donation to your local food shelf

We encourage you to share your most beloved memories of Barry here, so that the family and other loved ones can always see it. You can upload cherished photographs, or share your favorite stories, and can even comment on those shared by others.

Posted Nov 01, 2019 at 04:45pm
Our thoughts are with you and your family during this difficult time.

Dawn of Remembrance Basket was purchased for the family of Barry Midwinter. Send Flowers

Dreams from the Heart Bouquet was purchased and planted a memorial tree for the family of Barry Midwinter. Send Flowers

Posted Oct 30, 2019 at 07:36pm
Dear Roberta and family; Fred and I and our family are so sorry to hear of your loss of Barry. We send our love and condolences. What a wonderful and close family you have always been. Best wishes in the time to come. Fred and Judy Potthoff
Comment Share
Share via:
CK

Posted Oct 30, 2019 at 11:55am
So sorry for your loss. Our thoughts and prayers are with you at this sad time.
Sincerely, Brian & Christine Kilborn, Beef and Barrel Restaurant
Comment Share
Share via:
BN

Posted Oct 30, 2019 at 11:19am
We send our deepest condolences to Roberta and family on the passing of Barry. Barry and I were childhood friends during his Dauphin years. I have many fond memories of playing with him and being friends. Many fun times were had playing kick the can, touch football, hide and seek, sardines, as well as good times when Barry came out to our cabin at Lake Dauphin. Our lives took different paths and separated us and we lost touch, but he was never forgotten. - Bill and Shelby Neill
Comment Share
Share via: 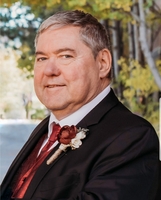